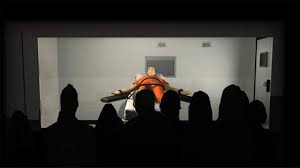 David Waisel, MD, an anaesthesiologist, has testified about the use of pentobarbital in executions:

Based on his lurching toward his arms and the lifting of his head and the mouthing of words, I can say with certainty that Mr. Blankenship was inadequately anesthetized and was conscious for approximately the first three minutes of the execution and that he suffered greatly. Mr. Blankenship should not have been conscious or exhibiting these movements, nor should his eyes have been open, after the injection of pentobarbital.

Given prior executions of Brandon Rhode and Emanuel Hammond in September 2010 and January 2011, respectively, during which these inmates reportedly exhibited similar movements and opened their eyes (Rhode’s eyes were open throughout the execution process), Mr. Blankenship’s execution further evidences that during judicial lethal injections in Georgia there is a substantial risk of serious harm such that condemned inmates are significantly likely to face extreme, torturous and needless pain and suffering. (State of Massachussetts, County of Suffolk., Affidavit of David B. Waisel, MD, p. 2-3)

In 2014, I watched the lethal injection of Marcus Wellons in a Georgia prison.

I noticed that Wellons’s fingers were taped to the stretcher, which made little sense, given his body had already been restrained by heavy straps. I kept asking myself why. I read into the subject and came across a report of the lethal injection execution of another death row inmate, Dennis McGuire, five months earlier. During that 24-minute process at the Ohio jail, McGuire clenched his fists. Perhaps it was a final, futile show of defiance. Perhaps it was an outward display of pain. With his fingers secured, Wellons could not have made any such gesture.

In 2017, I obtained a series of autopsies of inmates executed by lethal injection, which confirmed my worst fears. Wellons’s autopsy revealed that his lungs were profoundly congested with fluid, meaning they were around twice the normal weight of healthy lungs. He had suffered what is known as pulmonary oedema, which could only have occurred as he lay dying. Wellons had drowned in his secretions. Yet even my medical eye detected no sign of distress at his execution.

Wellons was executed with a chemical called pentobarbital, which caused his pulmonary oedema. If a post-mortem examination were to be performed on a body after assisted suicide, it’s very likely that similar pulmonary oedema would be found.

A 2020 review, published by NPR, of 216 autopsies conducted after execution in US States by lethal injection found signs of pulmonary oedema in 84% of the cases. The findings were similar across the states and, notably, across the different drug protocols used.

Not all states conduct autopsies after lethal injections. Texas, which has performed by far the most lethal injections of any state, has a policy of not conducting autopsies. When asked by NPR about this, a spokesperson for the Texas Department of Criminal Justice said, "We know how they died."

Euthanasia and assistance to suicide laws often include provisions designed to preclude autopsies such as excluding such deaths from being “reportable” to the Coroner and falsifying the death certificate by stating the cause of death as the medical condition for which euthanasia or assistance to suicide had been requested.

The protocol for self-administration of a lethal poison to cause death under Victoria’s law, for example, includes an anti-emetic and an anti-anxiety drug to be taken before drinking a mixture containing 15 g of pentobarbital. However, the person will still be conscious when the pentobarbital is ingested.

Dr Zivot comments that “without a general anaesthetic, many will be in great discomfort, even if outwardly they don’t appear to be suffering.”

In her 2015 dissent in Glossip v Gros, US Supreme Court Justice Sotomayor, characterised death by lethal injection as “the chemical equivalent of being burned at the stake”.

While drug regimes used to execute offenders in the United States are subject to scrutiny in the courts where evidence can be presented that they may cause a painful death, there is no such scrutiny of the drug regimes used for euthanasia and assistance to suicide, which are just as likely to result in such painful and inhuman deaths.