As the Senate commences debating the Leyonhjelm Assisted Suicide Bill, it should heed the wise words of Professor Margaret Somerville who point out that the international experience demonstrated that euthanasia was being used as a cheaper alternative to psychiatric and palliative care and that it would be a social tragedy if we allow assisted suicide legislation to pass.

August 13, 2018
John Anderson, who was Deputy Prime Minister of Australia from 1999-2005, and is widely respected from all sides of politics for his integrity and thoughtfulness, has urged the Senate not to endorse the proposal by Senator David Leyonhjelm to allow the territories to make laws for the state approved and facilitated suicide of those who find life "unsatisfactory".
Anderson warns that "Paving the way for the territories to legalise euthanasia and assisted suicide sends the message that government-sanctioned death is a legitimate way to address" problems such as a lack of access to best practice health services in remote communities. "We open this door at the peril of all future generations as we move one step closer to a heartless and expedient society where everything is expendable, including the lives of all those whom we, others, or even the state deem “unsatisfactory”.
The Senate should heed this wise warning from John Anderson and reject Leyonhjelm's heartless Assisted Suicide Bill.

August 10, 2018
Paul Kelly, writing in the Australian in October 2016, observed that "The argument against euthanasia has endured for many years: it leads, on balance, to a less compassionate society that creates a new series of moral and practical hazards for itself. It is a disproportionate response to the real problem of patient pain that needs more care and money. It is because a society that legalises killing has to change fundamentally in terms of the ethics of its doctors, its medical ethos, its family relationships and its principles of human life."
This profound observation by Mr Kelly should be attended to carefully by Senators as they debate and vote on the Leyonhjelm Assisted Suicide Bill next week. 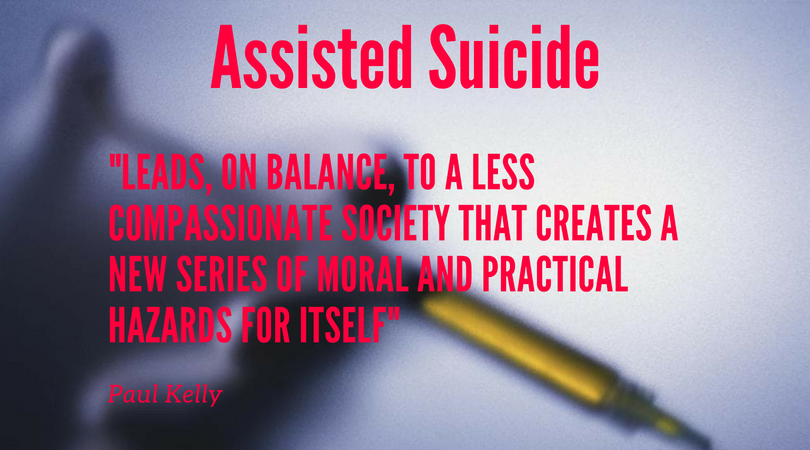 Paul Keating, former Prime Minister, has warned that any law permitting assisted suicide would undermine the "civilisational ethic that should be at the heart of our secular society". He observes that once such a law is passed "the expectations of patients and families will change. The culture of dying, despite certain and intense resistance, will gradually permeate into our medical, health, social and institutional arrangements. It stands for everything a truly civil society should stand against. A change of this kind will affect our entire community not just a small number of dying patients."

When the Senate resumes it will devote three days from 14 to 16 August to debating and voting on an assisted suicide bill introduced by libertarian Senator David Leyonhjelm.

FATAL FLAWS: a must see doco on assisted suicide and euthanasia

Fatal Flaws is a newly released documentary by Kevin Dunn on euthanasia and assisted suicide laws.

As its title suggests, the movie documents real flaws in these laws that pose fatal risks to the elderly, the disabled, the mentally ill and, indeed, all of us.