In a submission to the Royal Commission into Victoria's Mental Health System the Australian Care Alliance has presented evidence that assisted suicide and euthanasia, which are set to become legal in Victoria on 19 June 2019, pose an unacceptable risk to Victorians with mental health and that State funded and facilitated suicide undermines the universal  suicide prevention program and is discriminatory because it affirms that some Victorians would be better off dead. 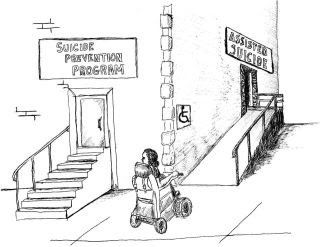 Thanks to Second Thoughts Connecticut for this cartoon

Not for mental illness only

The submission firstly points out that although Section 9 (2) of the Voluntary Assisted Dying Act 2017 (“the Victorian Act”) provides that: A person is not eligible for access to voluntary assisted dying only because the person is diagnosed with a mental illness, within the meaning of the Mental Health Act 2014, this provision does not preclude a person with a profound mental illness but who also has another “disease, illness or medical condition” that meets the criterion set out in section 9 (1) (d) of the Act from accessing assisted suicide or euthanasia.

Nor does it explicitly preclude a mental illness from itself being considered to be “a disease, illness or medical condition” that meets the criterion set out in section 9 (1) (d) of the Act. For example, a person with anorexia who is expected to die within 6 months as a result of refusing treatment could qualify. Even a person with treatment resistant suicidal ideation may assessed by some doctors as likely to die from this illness within 6 months. In Belgium between 2014 and 2017 there were 201 cases of euthanasia for mental and behavioural disorders. Of these 14 were cases where death was expected in the short term (‘breve’) as a result of the mental illness and so could potentially have also qualified under the Victorian law.

It remains to be seen whether the Victorian Act will be applied in this way.

Secondly the submission argues that, based on the evidence from Oregon which has a stronger requirement for referrals for assessment of decision making capacity than in the Victorian law, it is likely that many Victorians will be approved for assisted suicide or euthanasia whose decision is influenced by treatable clinical depression or other mental health issues.

In Oregon in 2018 alone it is estimated that about 25 people with clinical depression were prescribed and took a lethal poison without being referred for a psychiatric evaluation.

What can be done better to prevent suicide?

One of the questions posed by the Royal Commission into Mental Health in its call for submissions is: What is already working well and what can be done better to prevent suicide?

The Australian Care Alliance submission points out that from 19 June 2019 all those Victorians who are assessed by two doctors as eligible for assisted suicide under the provisions of the Voluntary Assisted Dying Act 2017 will, simply because of that fact, effectively be excluded from the otherwise universal public policy of suicide prevention for all Victorians.

This exclusion necessarily implies that the State of Victoria believes that these Victorians would be better off dead and supports their suicide as a legitimate, rational choice to be facilitated rather than prevented.

Indeed the State will issue a formal permit authorising the prescription of a lethal substance for the purpose of the person’s suicide as well as pay for and supply – including delivery throughout Victoria - the lethal substance.

The question arises as to how publicly and openly offering assistance, including financial assistance, to commit suicide to one group of Victorians Australians fits with the public policy goal, widely shared across the whole community, to reduce the incidence of suicide?

The submission makes the following recommendations: