"The culture of dying, despite certain and intense resistance, will gradually permeate into our medical, health, social and institutional arrangements. It stands for everything a truly civil society should stand against. A change of this kind will affect our entire community not just a small number of dying patients."

"The culture of dying, despite certain and intense resistance, will gradually permeate into our medical, health, social and institutional arrangements. It stands for everything a truly civil society should stand against. A change of this kind will affect our entire community not just a small number of dying patients." 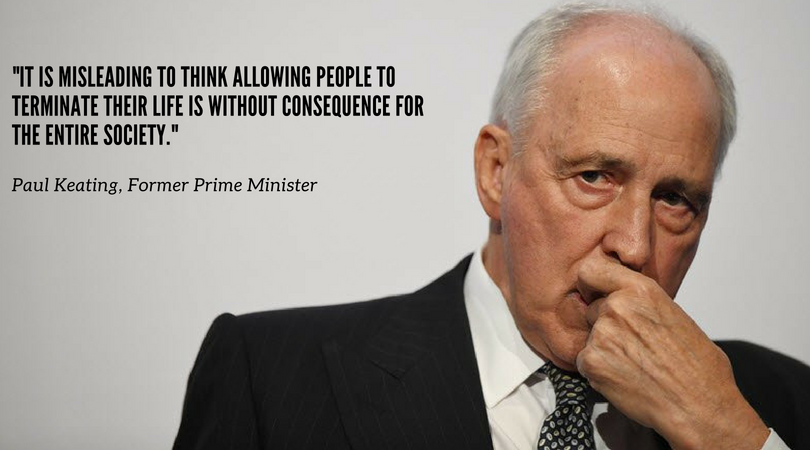 PAUL KEATING: VOLUNTARY EUTHANASIA IS A THRESHOLD MOMENT FOR AUSTRALIA, AND ONE WE SHOULD NOT CROSS

There is probably no more important issue in contemporary bioethics or a more serious ethical decision for our parliaments than that raised by the Voluntary Assisted Dying Bill 2017 being debated this week in the Victorian Parliament.

Under this bill, conditions and safeguards are outlined that will allow physicians to terminate the life of patients and to assist patients to take their own life. This is a threshold moment for the country. No matter what justifications are offered for the bill, it constitutes an unacceptable departure in our approach to human existence and the irrevocable sanctity that should govern our understanding of what it means to be human.

The justifications offered by the bill's advocates – that the legal conditions are stringent or that the regime being authorised will be conservative – miss the point entirely. What matters is the core intention of the law. What matters is the ethical threshold being crossed. What matters is that under Victorian law there will be people whose lives we honour and those we believe are better off dead.

In both practical and moral terms, it is misleading to think allowing people to terminate their life is without consequence for the entire society. Too much of the Victorian debate has been about the details and conditions under which people can be terminated and too little about the golden principles that would be abandoned by our legislature.

One of the inevitable aspects of debates about euthanasia is the reluctance on the part of advocates to confront the essence of what they propose. In this case it means permitting physicians to intentionally kill patients or assisting patients in killing themselves. Understandably, the medical profession is gravely concerned by this venture.

An alarming aspect of the debate is the claim that safeguards can be provided at every step to protect the vulnerable. This claim exposes the bald utopianism of the project – the advocates support a bill to authorise termination of life in the name of compassion, while at the same time claiming they can guarantee protection of the vulnerable, the depressed and the poor.

No law and no process can achieve that objective. This is the point. If there are doctors prepared to bend the rules now, there will be doctors prepared to bend the rules under the new system. Beyond that, once termination of life is authorised the threshold is crossed. From that point it is much easier to liberalise the conditions governing the law. And liberalised they will be. Few people familiar with our politics would doubt that pressure would mount for further liberalisation based on the demand that people are being discriminated against if denied. The experience of overseas jurisdictions suggests the pressures for further liberalisation are irresistible.

While there are different views strongly expressed within the medical profession, the president of the Australian Medical Association, Dr Michael Gannon, has explained that the formal position of the AMA is opposition to interventions that have as their primary intention the ending of a person's life.

Dr Gannon recently said: "Once you legislate this you cross the Rubicon. The cause for euthanasia has been made in a very emotional way and this is the latest expression of individual autonomy as an underlying principle. But the sick, the elderly, the disabled, the chronically ill and the dying must never be made to feel they are a burden."

Palliative Care has issued the most serious warnings. It says at least one in four Victorians who die each year (about 10,000 people) do not have access to needed palliative care, that access in aged residential care is "very low", that between 2 and 10 per cent of older Australians experience abuse in any given year and that its funding is inadequate to meet growing demand.

The submission highlights the problems with this bill – it is a disproportionate response to the real problems of patient pain and suffering, a situation that demands greater priority in public care and funding. It is true that if this bill fails then some people will endure more pain and this is difficult for legislators to contemplate. It is also true, however, that more people in our community will be put at risk by this bill than will be granted relief as its beneficiaries. This is the salient point.

Palliative Care said the bill 'sends the wrong message to people contemplating suicide and undermines suicide prevention efforts.' How could this not be the case? Suicide is the leading cause of death among people aged 15-44 and the second leading cause of death among people aged 45-54. International studies offer no support for the view that legalising euthanasia is associated with a decrease in non-assisted suicides.

The bill's failure is pre-set by its design.

The issue is not how many people will choose to die under this proposed law. It is how many people may die when otherwise they wouldn't. As Dr Gannon says it is "commonplace" for patients to tell doctors in front of their loved ones that they have no wish to be a burden on families.

Once this bill is passed the expectations of patients and families will change. The culture of dying, despite certain and intense resistance, will gradually permeate into our medical, health, social and institutional arrangements. It stands for everything a truly civil society should stand against. A change of this kind will affect our entire community not just a small number of dying patients. It is fatuous to assert that patients will not feel under pressure once this bill becomes law to nominate themselves for termination.

Opposition to this bill is not about religion. It is about the civilisational ethic that should be at the heart of our secular society. The concerns I express are shared by people of any religion or no religion. In public life it is the principles that matter. They define the norms and values of a society and in this case the principles concern our view of human life itself. It is a mistake for legislators to act on the deeply held emotional concerns of many when that involves crossing a threshold that will affect the entire society in perpetuity.

Paul Keating is a former Labour prime minister of Australia